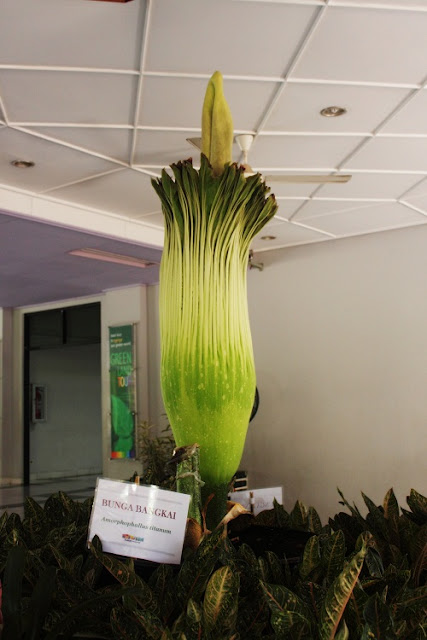 Titan Arum occurs throughout the Barisan mountain Range in West Sumatra, Indonesia. Its main distribution centre covers approximately 300 x 100km on the western slopes in secondary rainforests from sea level 1200m. It prefers humid soils and open places
where it grows in groups of individuals at all stages of development (Hetterscheid,
1998). In the description that follows, the life cycle of Titan Arum is described in order to provide a better understanding of its growth characteristics.
The plants grow at intervals interrupted by periods of dormancy. It produces either
one gigantic leaf or, having reached critical tuber size, inflorescences. The
tuber produces only one leaf at a time. This can reach an impressive size and resembles a small tree. The petiole of a mature plant may grow up to three meters in height. White circular marks on the petiole resemble lichens, and this phenomenon of mimicry is described in detail in Barthlott (1995).

The lamina is at least 3 times dissected and the one on a recent leaf of a mature Titan Arum at Bonn was 5.2m in diameter. It covers an area of 22m² and a leaf may last for 9 to 24 months. Young plants keep their leaves for only for 6 months. The tuber is capable of doubling its weight during the vegetative period. When it
has reached approximately 15kg it it is mature and can produce either a leaf or an inflorescence after dormancy.